For the ones who missed it last November, I’ve been playing with a Swift IDE prototype which allows you to easily develop Swift scripts for the mac.

I shared a video showcase demoing how the tight integration of the IDE with the toolchain allows you to write scripts, capture inputs and outputs, and all that in a neat SwiftUI interface: 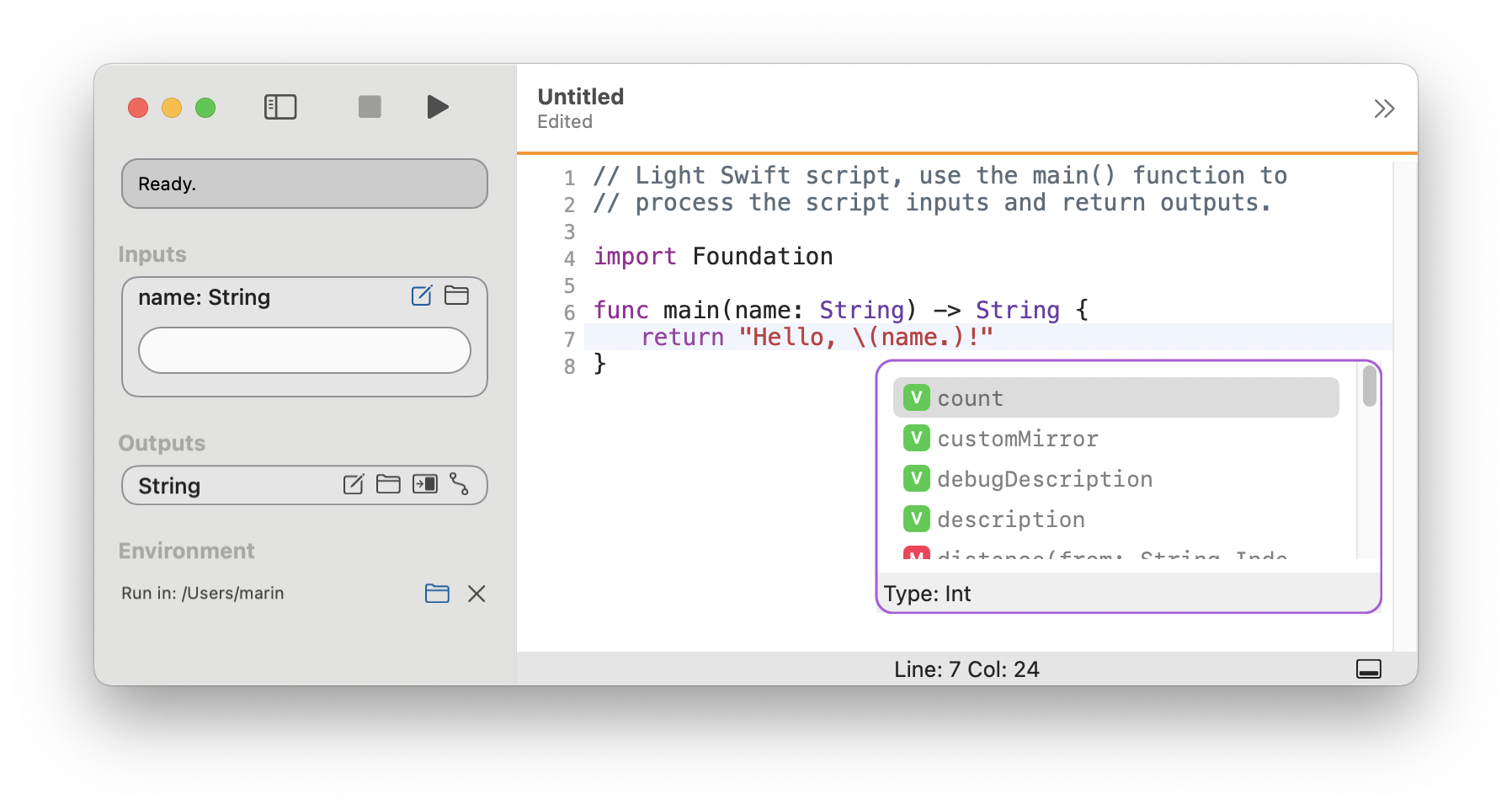 More than anything else I worked on this to explore and demonstrate how easily I can build powerful Swift tools. To build the IDE prototype only took a few weeks of on-and-off work.

For personal reasons I couldn’t do much since November but last week I had a few days of free time and worked on three cool concepts I’d like to show you.

Firstly, I took few hours to add a test runner and live tweeted about it. The feature allows you to:

🎬 I made a short video to show what I achieved today. Diagnostics and benchmarks didn't make it in the video but ran out of time. That was fun 😊 pic.twitter.com/H4d3jWQMCC

The next day, I thought it’d be fun to add yet another build pipeline — for instrumenting. In the past I often needed to time (i.e. clock the duration of) random pieces of code, so I went forward and added that feature right in the UI:

🎬 Here's the video showing today's work - you can select pieces of the source code and time them. If the same code runs multiple times you see each iteration (should probably also show the total of all runs at the bottom too) 👌🏼 pic.twitter.com/XE8HYyBKIo

Finally, I worked on extending Swift from within the IDE. I really believe it could be very beneficial for the language if there was an easy way to extend it with new functionality so everyone could build features.

So, I took few hours to add a freeze command to Swift that freezes a variable to prevent you from mutating it in a given context:

🎬 Wow, this literally took less than 3 hours. A concept for a "freeze" @SwiftLang operator that forbids you from mutating variables in a given scope at compile time. Good Sunday fun 👌🏼 pic.twitter.com/UxbDSEpW7X

Needless to say, this was incredibly satisfying to work on (especially given how quickly it was implemented) because it made me feel a bit more in control of what Swift could do for me :)

What’s next for Swift Light

At this point the prototype has a solid infrastructure that allows me to add faetures in mere hours as the key elements like the editor, diagnostics, toolchain and custom panels are playing very well together.

On the other hand, there hasn’t been too much of a reaction to the videos and the information I been sharing. I feel like I’ve done plenty to share on all channels I have access to but that’s barely moved the needle — no newsletter shared about this, I couldn’t engage in a meaningful discussion about this publicly, and few people even shamed an Xcode alternative IDE in private.

Maybe a bigger company could launch this to a success and effectively spark the interest in a powerful Swift IDE(s) for specialized tasks as I imagine it. But I don’t think I can do much with the limited reach I have on my own.

Do you have any thoughts about Swift Light? Know a company that could be interested in it?

Reach out at https://twitter.com/icanzilb or find me in one of the dev Slacks like https://combinecommunity.slack.com

If you’d like to support me, get my book on Swift Concurrency:

Interested in discussing the new async/await Swift syntax and concurrency? Hit me up on twitter at https://twitter.com/icanzilb.